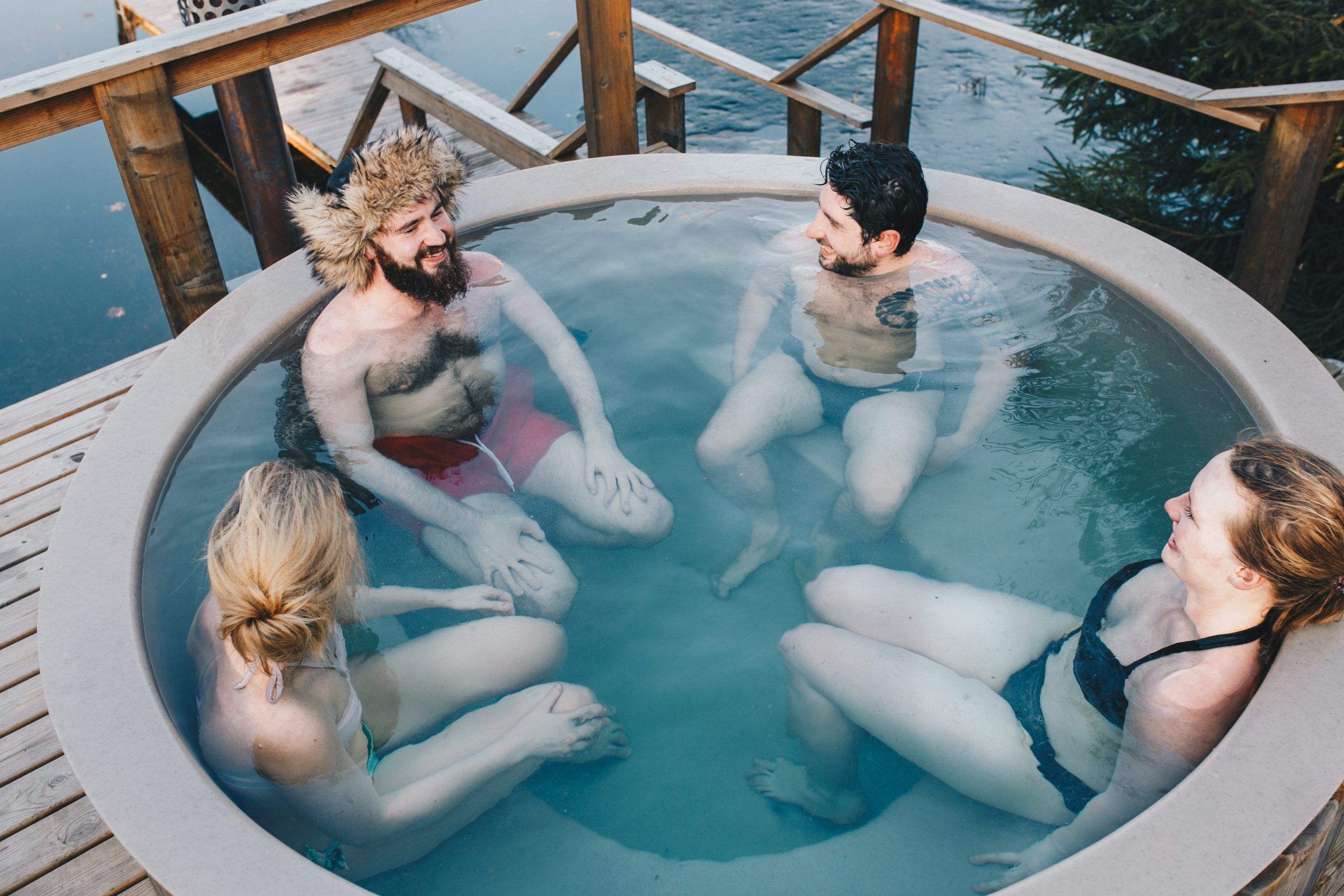 If you're living and working abroad, I'm sure it's happened to you.

You’ve most likely been frustrated by it.

“Why the s... does the exchange rate always move against me?!

You also probably wondered why exchange rates exist and what makes them work.

It’s happened to us more times than we care to admit.

(seriously, before starting this company, we were just regular everyday expats. Actually, we still are; we just happen to have a startup).

To help empower you with awesome financial knowledge, we wrote this quick post telling you everything you need to know about exchange rates.

That way, you can have some peace of mind, show off to your coworkers, and stop swearing at your laptop every time you check out how the euro/dollar is doing.

The economy is a lot like a hot tub.

Hear us out before you hit the ole back button.

You don’t want it too hot or too cold, and it’s always better when it’s bubbling.

When an economy gets too hot, people and companies wind up getting burned.

When it's too cold, no one's having a good time.

People are too busy not freezing to interact with others.

When the economy is at just the right temp (and with the bubbles flowin’), businesses and people are happy.

They spend and borrow money.

Someone has to control the hot tub economy, and that person is a central banker.

The key role of central bankers is to keep the economy at the right temperature.

To do so, they have two key roles:

Instead of turning up the heat or adding cold water, central bankers control the hot tub economy with interest rates.

Interest rates are kind of a big deal.

They set how much we get paid for putting our money in savings accounts.

Banks use them to set a base rate for making loans to businesses and individuals.

Companies and people depend on them all. The. Time. them

If the central bank thinks the economy is too hot, then it raises the interest rate.

With higher rates, people will save more (since they get more interest in their savings accounts) and borrow less (because you pay higher interest on loans).

If they think the economy needs heating, they’ll cut rates.

That way, people and companies save less, spend more, and take out loans (because it costs less interest to borrow money).

If the central bank gets this formula right, then the economy does well, and everyone is happy.

Of course, life isn’t this easy.

Central bankers look at all sorts of indicators to take the economic hot-tub’s temperature and influence their decisions.

These include unemployment and inflation rates, growth, manufacturing, consumer and producer confidence, and more.

Despite the periodic cooling and overheating of the economic hot tub, central banks in many countries do their pool attendant jobs exceptionally well.

Wait, so what does a hot tub have to do with exchange rates?

To the surprise of absolutely no one living abroad, no two countries are alike.

Some countries are too dependent on commodities like oil or gas, putting them at the mercy of international markets.

In other places, the governments might be mismanaging the economy, creating unintended consequences.

Every country has unique views on how society, money, and the economy interact.

Whatever the case, each central bank will do what it can to get the temperature just right

At its core, the exchange rate is the difference in interest rates between two economies.

Like everyone looking for the best hot tub, they’ll move their ‘ass’-sets (sorry, it was too easy) into the economy that pays the best rate and has the best bubbles.

Economic hot tub enthusiasts like currency traders and large financial institutions watch these reports like their lives depended on it.

Whenever news comes out or before the central bank makes a temperature announcement, currency traders get to work.

Inevitably, one currency will weaken against the other.

Depending on how you look at it, yours will either go up or go down.

After all, as more people leave one hot tub for another, the water will cool.

In the other tub, as more people come in, the temperature heats up.

If a currency trader thinks leaving one jacuzzi for another now will get them a better spot, they'll sell their ticket in the current one.

Other traders will notice, selling seats in the cooling tub and buying a place in the warming one.

When everyone's hot tub is the same temperature.

We're currently in a pandemic, and most developed world countries are more or less in the same boat.

When interest rates in an economy are more or less equal, investors will look at other factors.

For one, in uncertain times, they want security and stability.

Usually, that means investing in safe assets, like gold or, more broadly, the US dollar.

Even if that hot tub isn’t great, you’ve spent a lot of time in it in the past.

Plus, the pool attendant central banker usually does a fantastic job keeping it running.

However, if every one of your friends plus a bunch of strangers is crowding it, you might think to yourself, "maybe it's time to move once the rest of the world seems less uncertain."

You decide to get out of your American hot tub and head back to your European one.

After all, the European one might not be as big and the bubbles not as strong, but it seems a bit more ‘cultured and laidback.’

Besides, their pool attendants also do a great job with temperature control.

Everyone else starts to get the same idea.

With people leaving the US dollar (or other safe havens), the dollar's value falls.

The exchange rate drops with it.

Meanwhile, you're sitting anxiously in your Parisian apartment, continually refreshing the EURUSD rate, and screaming at your laptop in disgust.

At least the hot tubs here are nice, right?

What people living abroad can do about exchange rates

So now that we know the magic of hot tub economics, how can people living and working abroad use it to their advantage?

In short: you can’t.

Exchange rates are one of the most unpredictable financial instruments in the world.

They also happen to be the most-traded assets on the planet.

Every day, there is over 6 trillion dollars worth of currency exchanges on the global FX markets.

Aside from currency traders, banks, multinationals, and people sending money abroad (like yourself) are constantly changing money.

The market is enormous.

You, as an individual, can do absolutely nothing to beat the market.

In fact, if you try, some professional trader will throw a proverbial pie in your face.

You don't want to be on the business end of that pie.

Here’s what you can do.

As an individual, you generally want to have only two of those at one time.

The first one comes with a ton of risks.

Trading on a platform, especially if you don't know what you're doing, will most likely end in a bad time.

If/When you need to exchange money, use a low-cost platform like TransferWise or CurrencyFair.

It’s all transparent and above board, making it easy to convert whatever amount you need.

Don’t believe anyone who tells you they know where the exchange rates will be, even if that date is tomorrow.

No one can predict the future.  Full stop.

If anyone tells you that they know or are convinced that the exchange rate will be in x-time, know this:

They’re full of it.

It's impossible to tell where any investment will be in the future.

Currency markets are no different.

In fact, they’re notorious for moving on a whim.

Each central bank manages its own hot tub.

The central bankers don’t really care about other hot tubs.

It's true they work together on some issues, but it's more about keeping money flowing than exchange rate management.

In early 2015, the Swiss national bank decided it would reset its exchange rate policy.

In a matter of half an hour, its value against the euro and US dollar jumped 30%.

No one saw that coming.

Expect that exchange rates could go anywhere at any time.

Need to protect yourself against the exchange rate?

If you’re worried that you might lose, make two calculations:

From there, set alerts slightly above that rate.

If you get the alert, then immediately exchange money.

Yeah, it sucks: you lost out.

But on the other hand, you knew your limits ahead of time and had much less to worry about.

You could gain too, so you can set the alerts the other way.

Whatever you do, don’t get outside of your risk comfort; there’s absolutely no point losing sleep over exchange rates.

(Hey, quick plug. We're building a product for people living & working abroad to better manage finances and make investments. We're going to automate currency movements like this for you, so you really don’t have to do anything. Sign up here for early access!)

It’s a wild roller coaster - one you can’t control.

What you can do is get in the right mindset.

Go in with the mentality that, for some people, living abroad or working remotely has built-in currency risks.

Doing so will give you peace of mind.

Managing your finances doesn’t have to be.

Editor's note: this article was originally published in October 2019. It was revised in June 2020 and December 2020.

Abroaden is a company for expats, digital nomads and other world citizens looking for low-cost and transparent financial advice and investment management.